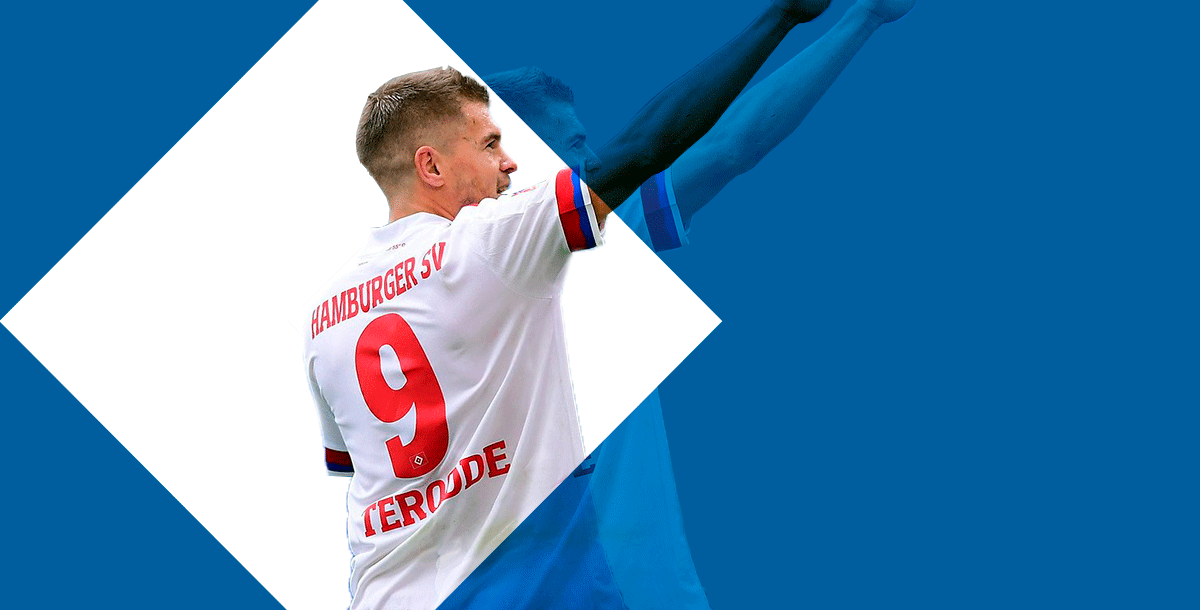 The 2. Bundesliga has always been a league that has provided goals and attacking individuals have always been able to enjoy a huge amount of success when they find themselves bearing down on goal.

For instance, the 2019/20 2. Bundesliga top goalscorer was Fabian Klos as he managed to bag 21 goals for Arminia Bielefeld in the 33 appearances he made.

The forward was closely followed by the likes of Manuel Schäffler and Philipp Hofmann in the 2. Bundesliga top scorer battle as the then-SV Wehen Wiesbaden and Karlsruher SC forwards managed to net themselves 19 and 17 goals each respectively.

Indeed, this football season looks to be following a rather similar pattern in regards to the number of goals being scored and there are a number of forwards that have already made a flying start in their pursuit to be named the top scorer of Germany’s football second division.

Hamburger SV’s Simon Terodde currently leads the league in regards to the goalscoring charts and he would have to be considered a favourite to win the 2020/21 2. Bundesliga top goalscorer award.

The veteran forward arrived in the summer and has proven to be incredibly experienced when it comes down to finding the net at this level as he has managed to do it on a consistent basis.

Following 9 matches, the experienced forward has already managed to net a goal-a-game 9 and is leading the rest of the chasing pack heading to the top scorer award once again.

1. FC Heidenheim 1846’s Christian Kühlwetter has also started off in terrific fashion for his club, having recorded 8 goals in his 9 matches so far, thus making the 24-year-old someone that needs to have an eye kept closely on regarding the 2. Bundesliga top scorer battle.

Manuel Schäffler could look to challenge for the 2020/21 2. Bundesliga top scorer award this season once again, though, as the 1. FC Nuremberg striker has started life in the fast lane for his new club.

As mentioned, the 31-year-old managed to scored 19 goals last season whilst playing for Wehen Wiesbaden and since making the move, he has managed to bag himself 5 goals in his 6 appearances so far.

In addition, Philipp Hofmann may also look to challenge for the award as well as the Karlsruher SC forward has also started in good form. The 27-year-old has 4 goals in his 7 matches for the 2. Bundesliga outfit so far this season.

Going based on the current form of the strikers already mentioned, it would not be a surprise if one of the trio – if not all three of them – were to be sitting at the top of the 2. Bundesliga goal scoring charts come the end of the season.

Terodde, though, would have to be favoured to win the 2. Bundesliga top scorer title as he has already started off incredibly quickly and combine that with his experience in the division, the Hamburger SV striker should continue to net goals rather regularly.