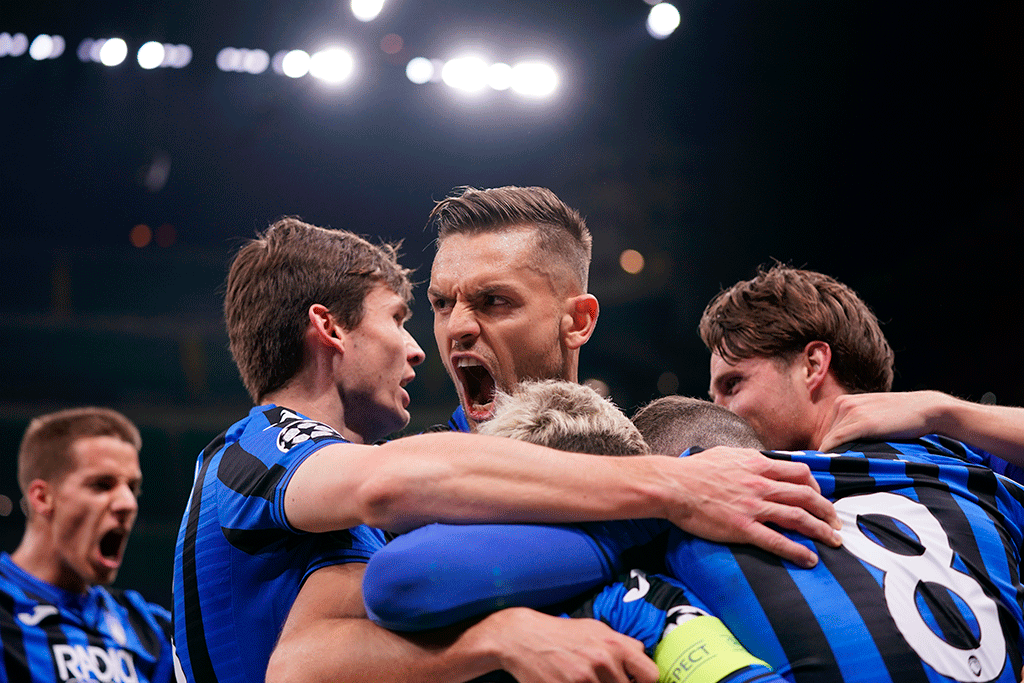 Atalanta BC football squad have had an exceptional 2019/20 campaign and their performances in the UEFA Champions League have certainly caught the eye across Europe and the planet as football fans all across the world have taken note.

I Nerazzurri, as they are nicknamed, appear to have upset all the odds in Europe’s elite club competition as they have managed to reach the quarter-finals of the Champions League despite having had a seriously poor start to the competition back in September.

Atalanta BC football squad were placed in a group that contained Manchester City, Shakhtar Donetsk and Dinamo Zagreb and would have not been considered to be a favourite to progress from the stage.

Their start of the UCL tournament certainly would not have filled many with confidence as they lost their first three matches in rather horrible fashion, leaving them with plenty of work to do. Following a 4-0 defeat to Zagreb, a 2-1 defeat to Shakhtar and a 5-1 hammering at the hands of Manchester City, the Serie A outfit’s European journey looked to be over.

However, the Italian football team then managed to go unbeaten in their final three matches, having recorded a 1-1 draw with Manchester City, a 2-0 victory against Zagreb and a 3-0 win in Ukraine against Shakhtar.

Against The Odds, Atalanta Continues To The Quarter-finals

I Nerazzurri’s Round of 16 match saw them come up against Valencia CF and there would have been some doubts about their chances to overcome the Spanish football team, as they had topped and qualified from a group containing Chelsea, Ajax and LOSC Lille.

Nonetheless, Gian Piero Gasperini’s squad would go on to continue their fairytale story in the 2019/20 edition of the Champions League as they would defeat Los Che 8-4 on aggregate as they managed to score four in both fixtures.

Atalanta BC have now managed to set up a dream quarter-final encounter against Paris Saint-Germain. The football team will need to rely on players like Josip Ilicic and Mario Pasalic as the duo have been incredibly effective in the tournament, with both having a hand in seven of the 16 goals to have been scored so far.

Atalanta’s Exceptional Form On The Serie A 2020

Whilst there will be extreme doubts as to whether the Serie A football team will be able to continue their adventure in the Champions League, their form in domestic competition could certainly be something that can provide some optimism with the italian football team.

Atalanta BC managed to finish their Serie A 2020 season in third place behind Juventus FC and Inter Milan, edging out SS Lazio on goal difference. Il Nerazzurri managed to score an incredible 98 goals in their 38 matches, conceding just 48 as they recorded a number of score lines whereby they scored seven. Ilicic, Pasalic, Luis Muriel and Duvan Zapata were red-hot for the Italians when it mattered.

What Are Atalanta’s Chances Of Reaching The Final

Of course, on paper, PSG has a squad that can overpower any of the biggest football clubs in Europe with men like Kylian Mbappé, Mauro Icardi and Neymar Jr. leading the line and it will make it incredibly difficult for Atalanta to progress.

However, if players like Ilicic and Pasalic are on top form and play at their very best, plus the addition of the game being played as a must-win tie, it would not be wise to overlook Atalanta BC football team and their chances of continuing their dream run in the 2019/20 edition of the Champions League.