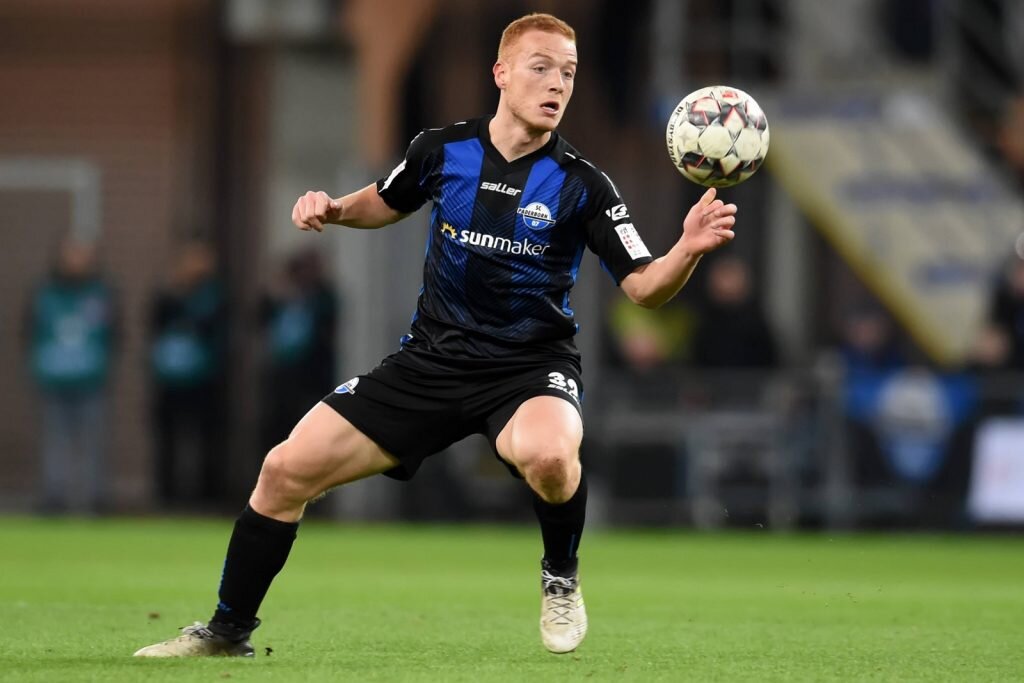 Despite Paderborn enduring consistent tough outings, Vasiliadis hasn’t let anyone down. The 22-year-old has shown his abilities on a regular basis, emerging as one of the standout deeper midfielders in the Bundesliga statistically.

While Vasiliadis isn’t exactly a defensive midfielder, he is more a box-to-box engine who likes to take part in both aspects of the play. This drives Paderborn forward, carrying the ball into the final-third after winning it back in slightly deeper areas.

Under Steffen Baumgart, Paderborn have regularly played in a double-pivot this season. There have been variations, but that has been a constant with Klaus Gjasula and Vasiliadis being regulars in the double-pivot of the formation. While Gjasula stays deeper, the Greek is tasked with the job of carrying the ball forward and adding spine to attack.

Being a complete midfielder, he does effective work in both departments. As per FBRef, Vasiliadis ranks fourth in the tally for highest midfield pressures this season. His tally stands at 305, with Konrad Laimer right at the top. He is also ninth, when it comes to tackles won in the middle third of the pitch. It shows how effective he is at putting the opposition in tough positions and potentially winning the ball back.

While that is a very good account of Vasiliadis’ abilities, he is exceptional at tackling opposition dribblers. He ranks fifth in the league for tackling dribblers and has a tackling accuracy of 38 percent in that regard.

FBRef suggests that the Greek ranks 17th in the league for the most chances created from open play. His number is at 48 – tied with Robert Lewandowski. This also shows that while he does create chances from open play, playing in the worst team in the league doesn’t help him at all.

All of these numbers are the highest for Paderborn and it proves how complete an outlet Vasiliadis actually is. In absolute terms, he completed 1.8 dribbles per 90 minutes. This allows him to take the ball closer to the forward players, as he also creates one chance per 90 minutes.

Those certainly aren’t overly impressive qualities, but Paderborn put the highest amount of pressure in the defensive third. It is proof to the fact that they play deeper than a player like Vasiliadis would like. In relative terms, he is a lot like Suat Serdar and would suit a team might play a more progressive brand of football than Paderborn.

He is only 22 and is into his second season at the club. In the club’s 2. Bundesliga campaign last season, he had become their chief creator and had played a destroyer role in midfield too. In a lesser league, Paderborn had more of the ball and Vasiliadis thrived. He scored six goals, picking up as many as ten assists.

In that sense, clubs should be looking at the possibility of signing him soon. He could well replace someone like Serdar at Schalke, as he brings a similar skillset to the plate. Wherever he goes, one thing is certain- his future is very bright indeed.