Top 5 Bundesliga Games Of All Time 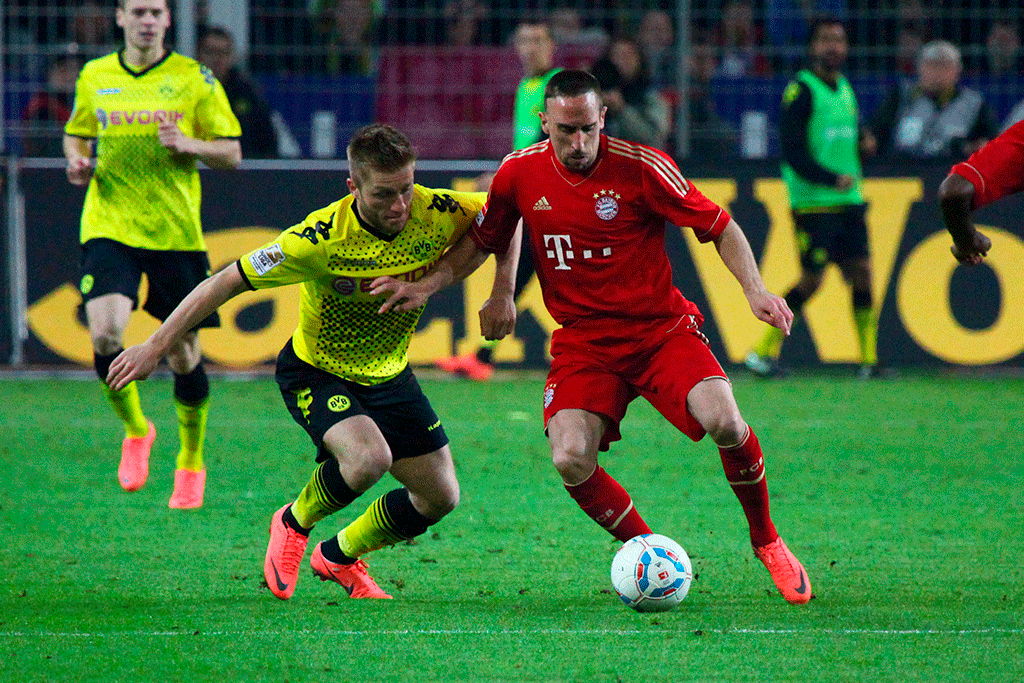 Since the start of the Bundesliga in 1963, there has been a great number of interesting games. Derbies, title fights and relegation duels have always produced excitement and drama. We take a look at the 5 best Bundesliga games of all time.

On a Wednesday evening in February 2002, the record title winner Bayern were host in the north, at the Millerntor. Two months prior, Bayern being the current Champions League winner, had won the club world cup. The so-called underdog from St.Pauli seemed to have no chance, and no one would have bet a penny on them.

On this evening, all should be different though. A turbulent game evolved, perfectly matching the David against Goliath saying. After more or less half an hour was played, the home team surprisingly managed to score the opener thanks to a goal by Thomas Meggle. But that was not all of it: just three minutes later, Nico Patschinski increased the lead to 2:0. The great FC Bayern were shocked.

Carried by the huge atmosphere in this floodlight game and the passionate support of 20.000 fans in the sold out arena, St.Pauli fought till the bitter end. Late in the game, Bayern managed to cut the deficit to one goal when Willy Sagnol scored, but failed to reach more. St.Pauli were able to save the lead until the end of the game und called themselves later on “Weltpokalsiegerbesieger”, which can be roughly translated into “the ones, who beat the world champion”.

The westphalian Derby is always known for great, intense games. This was also the case in November 2017, when they met in the Signal-Iduna-Park, which was sold out with the attendance of 80.000 fans. The black-yellows had the better start in their home game and took the lead early on thanks to Pierre-Emerick Aubameyang. An own goal by Benjamin Stambouli and a goal by Mario Götze quickly showed how the game will take shape. After only 20 minutes, Borussia Dortmund was the much better side and had a 3:0 lead. Only five minutes later, Raphael Guerreiro increased the lead even to a 4:0. It looked like a catastrophe for Schalke.

In pure desperation, Schalke coach Domenico Tedesco even made two substitutions after 33 minutes. The game continued slowly, and even the 1:4 by Guido Burgstaller was no reason for concern. This changed drastically though, when Amine Harit scored the 4:2 and Aubameyang got the red card only a minute later. All of the sudden, when only 20 minutes were left to play, Schalke sensed that the game was not over yet. At latest, Daniel Caliguiri’s 4:3 goal was the moment when everybody knew that a sensation could be possible.

Schalke tried everything in the final minutes, attacking relentlessly, while Dortmund defended with every man they had. When finally in the 95th minute Naldo scored the equalizer after a corner kick, all hell broke loose. Schalke enjoyed the draw like a victory, while Peter Bosz and his players could not believe that they had not won this game. Truly a derby for the ages!

Already in the 1970s, FC Bayern set the benchmark both in Bundesliga and internationally. Their biggest rival had been the young Mönchengladbach team, who were able to thrill the masses with their juvenile approach. One of the greatest games between these two teams took place in December 1973, when they met at the Olympiastadium in Munich.

Both teams had top stars in their rows and gave their nation a spectacular game. Franz Roth scored the opener for Bayern after four minutes, but Herbert Wimmer was able to equalize a minute later. Henning Jensen’s goal for Gladbach after 18 minutes was also equalized by Gerd Müller just as well. Thus, after 20 minute, the score was 2:2. Just three minutes later, Rainer Zobel scored with a header after a cross by Uli Hoeneß.

After this crazy first half, in which Bayern was up 3:2, the game calmed down. In the second half though, it got hectic again when Uli Hoeneß scored the 4:2 for Bayern after 64 minutes. Franz Beckenbauer gave the assist to that decisive goal. Möchengladbach did not back down and scored in the 88th minute with Rainer Bonhof. The 4:3 was the end to a truly exceptional game. Also thanks to this game, Bayern were able to win the championship that year.

After the epic Champions League final in Wembley in Mai 2013, both this teams met half a year later in Bundesliga again. On the Bayern bench, Pep Guardiola was now in charge. This episode between Pep and his rival Jürgen Klopp will still be present in the catalan’s mind. 80.000 fans in the sold out Signal-Iduna-Park saw a tactical game that was quite intense.

Klopp’s team, known for their great press, tried to put pressure on Bayern. Guardiola had a different plan though. Javi Martinez played as number 10 behind Mario Mandzukic, so that Bayern could tire down Dortmund with long ball. In the 60th minute, Guardiola then set the decisive move with the substitution of Mario Götze and Thiago Alcantara.

Bringing in these technically skilled players meant that Bayern changed back to short passes. They were able to confuse Dortmund. Only six minutes after the substitution, Götze marked the opening goal. Arjen Robben and Thomas Müller increased the lead, Bayern won 3:0. From a tactical standpoint, this game marked Bundesliga’s peak.

More action is barely possible! On February, 11 in 2006, Schalke hosted Bayer Leverkusen. 61.000 fans in the Veltins Arena saw a game no one will ever forget. Thanks to goals by Sören Larsen, Mladen Krstajic and Zlatan Bajramovic, Schalke was up 3:0 after 30 minutes.

Right before the halftime break, Andrej Woronin scored the 3:1. Coming back from the break, Dimitar Berbatov even scored the 3:2. Leverkusen’s joy did not hold long though. Kevin Kuranyi and Sören Larsen quickly reinstalled the three goal lead, and Schalke looked like the winner already after 62 minutes.

But then Andrej Woronin scored again, and only six minutes later, Jacek Krzynowek marked the 5:4! It was a thrilling game and the atmosphere in the arena was stunning. Lincoln’s goal in the 75th minute and Gerald Asamoah’s goal in the 80th minute ultimately secured Schalke’s win and ended this spectacular 11 goal game.